There is a lot of advice floating around on the internet about how to use Twitter. If you’re running a business, starting a blog or simply using social media for the first time, it can seem overwhelming. With so many other important things to do, not many of us have the time to take a course on writing the perfect tweet.

Fortunately, there are some simple, foolproof ways to make sure your tweets are fully optimized, especially when you’re sharing content. In this guide, we cover the 6 steps we use at Quuu to craft effective tweets, from wording to publication.

Generally speaking, there are three main types of tweet you can post: text only, text and a link, or text and media. The type you choose depends largely on what your aims are on Twitter and who your target audience is (if you’re not sure about this, see the links at the end of this post for further reading).

It’s a good idea to have a variety of these types, but it’s worth noting that tweets that contain more than just text tend to get better results: tweets with links get around 86% more retweets.

It’s also a bad idea to share only your own content or news on Twitter – sharing other peoples’ can actually help you start conversations, gain trust, and build authority (more about that here).

Now you’ve decided what to say, it’s time to decide how to say it.

Twitter is a tool for communication above all else. This means that, when people see your tweets, they need to know what they are looking at. This sounds obvious, but it is surprising how often people end up losing their message by trying to cram too much into their message. Forget all the stuff Twitter can do – what is your content about? What does it offer to readers?

If you’re not sure where to start, here are some common ‘types’ of tweet that work really well (if you’re more interested in hashtags, mentions and attachments, feel free to skip ahead).

If you’re sharing something that has a truly great headline, why make life difficult? Simply use that as the text in your tweet. It may sound obvious, but it works really well for headlines that clearly show the value of the content you’re posting. 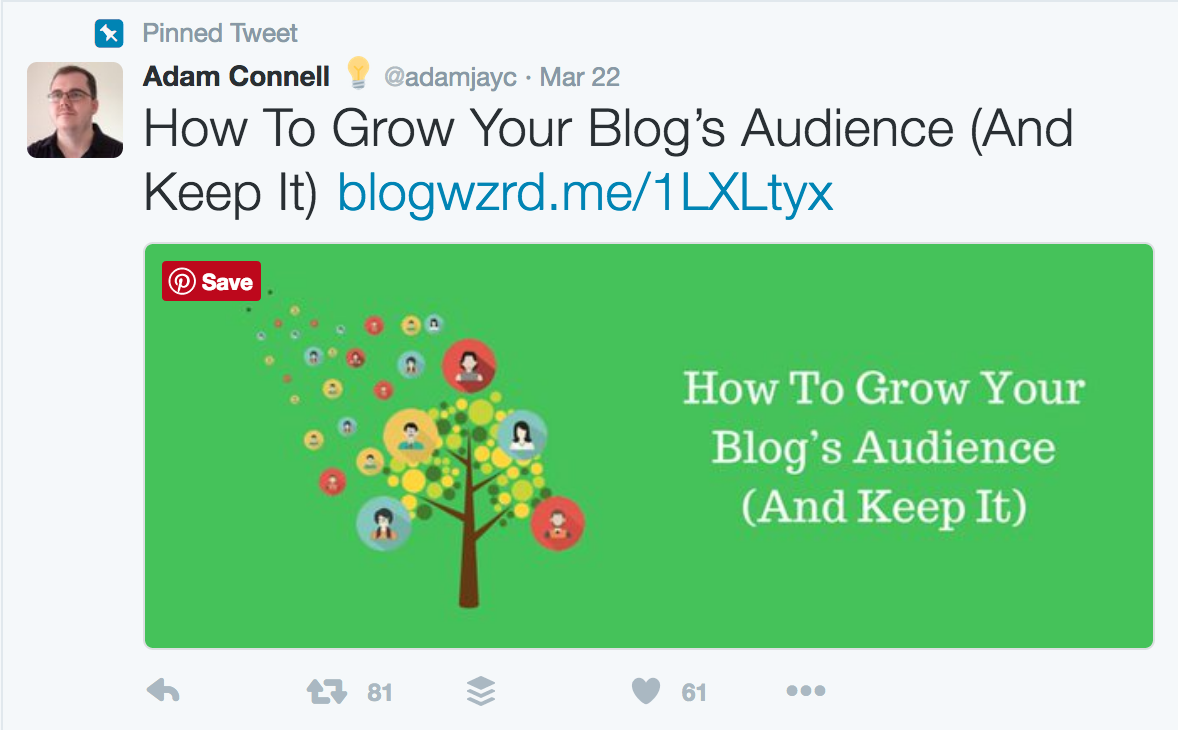 ‍This headline from @adamjayc works because it addresses his target audience’s biggest concern: growing and retaining an audience. The incentive to click on the link is clear.

In publishing, the job of a book blurb is to intrigue the reader to buy it. It gives a sneak peak of content so people can decide if it’s up their street, but not so much that they feel satisfied. This also works for Twitter, especially if you have a flair for the dramatic.

Questions have been popular in advertising for decades, and they work similarly well on Twitter – especially if they are thought-provoking. 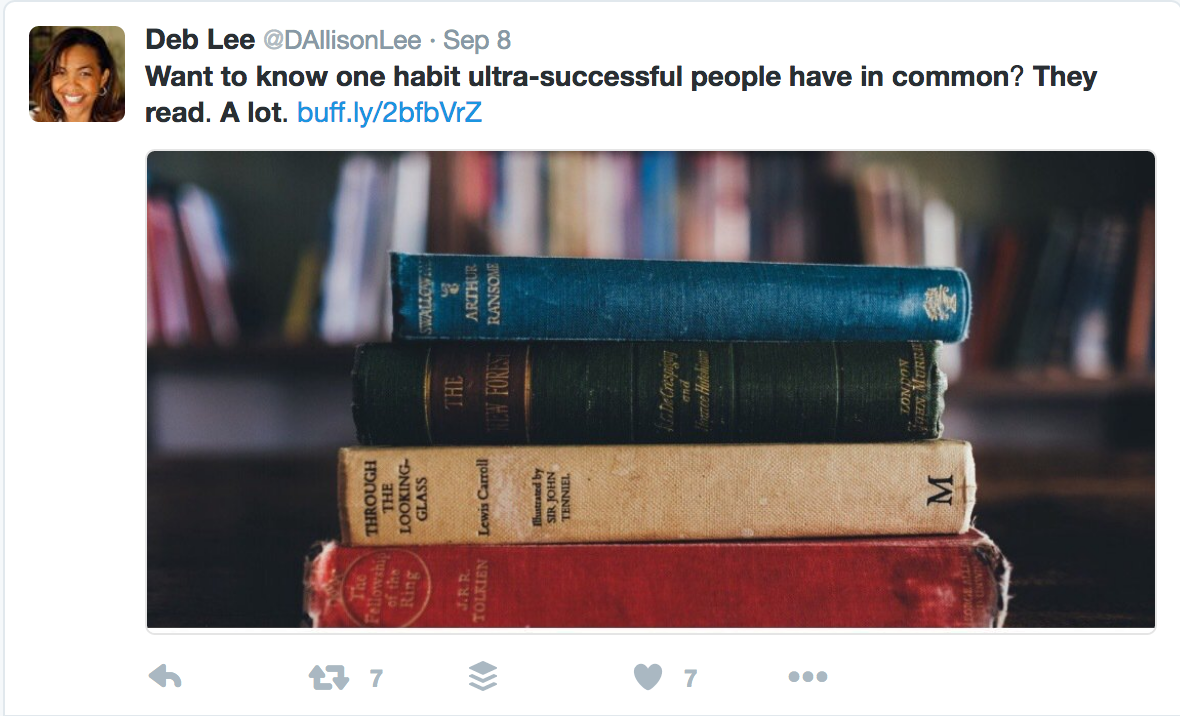 The key here is not only to ask the question, but also to give a hint at the answer, like in this post from @DAllisonLee. This is much more enticing than the question alone,

Is your tweet going to be controversial, surprising, poignant or funny? Even better, is it from someone well-known or influential? If yes, sharing quotations is a great option. 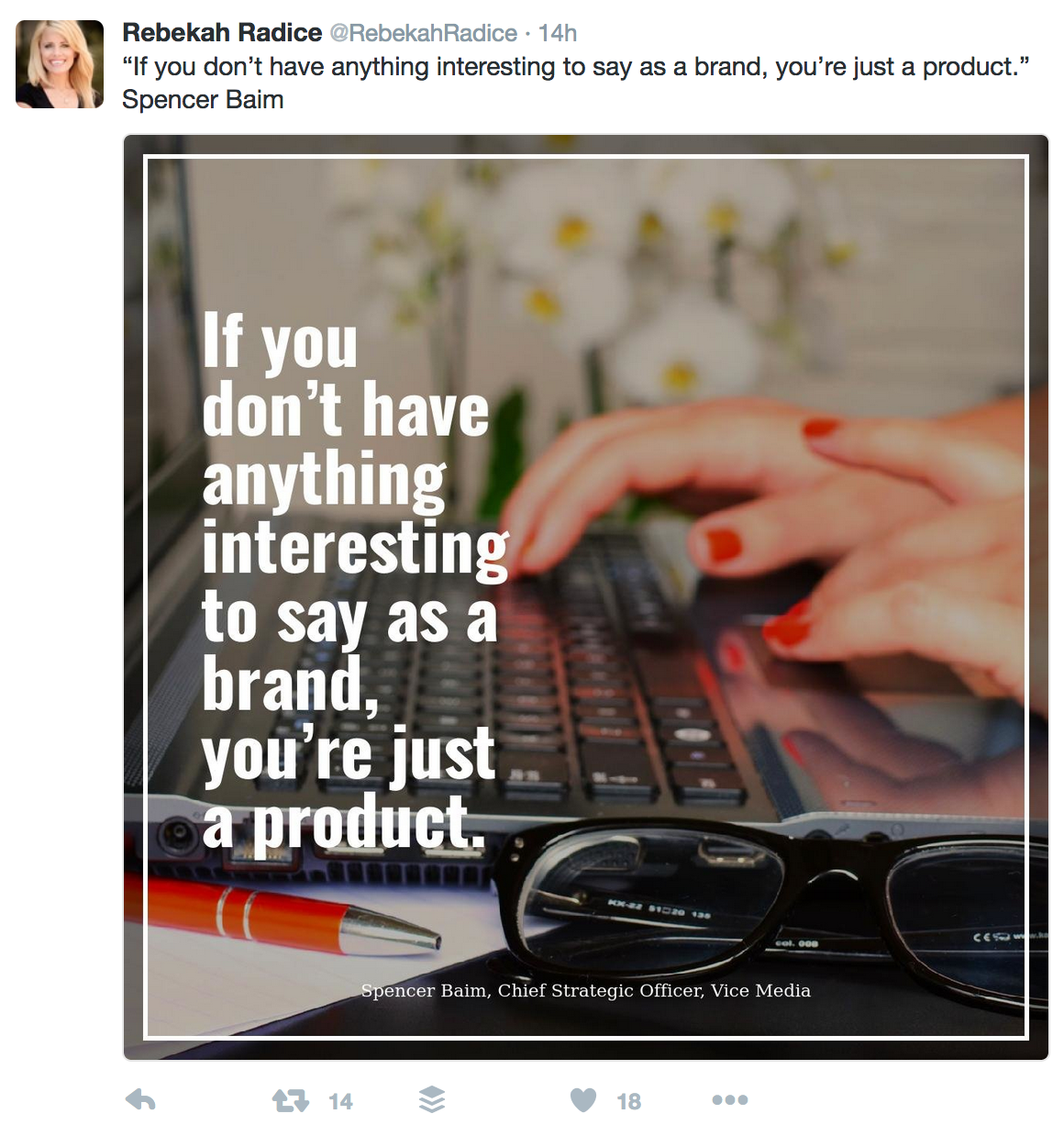 This quote is assertive – immediately, it creates an impression of expertise. People looking at this can assume that Rebekah knows some stuff about branding, which will attract people who want help on this subject. Most importantly, though, it represents her brand; if readers like this quote, they’ll probably like other things she has to say.

Same principle as a quote, but much better suited to information that is based on research, experiments and other data. These make the most impact if they are surprising, ground-breaking, or would be considered important by your target audience – like this one from @DaytonDavis.

This one comes with a warning: you can’t use this one too often on Twitter. People don’t like to be bossed around, or feel like the only reason you’re on Twitter is to get something from them. As we covered in a previous article, content marketing is always about helping, not selling – or to put it another way, ‘give, give, give, then ask.’

If you’re sharing content, now is a good time to attach your URL, image or video.

Thanks to Twitter’s rule change in September 2016, these extra attachments will no longer count towards your character limit, so you can share media and links to your heart’s content. However, there are still a few things you might want to adjust before doing so:

Sure, you can just copy and paste the original URL – there’s nothing wrong with doing this. However, some people prefer to use shortened links. They have the advantage of being able to track some analytics information, like how many people have clicked on the link. Services like Bitl.y and Buffer do this.

If you’re attaching an image, gif, video or other file, it’s a good idea to check the file isn’t too large. The maximum size for images is 5MB and 512MB for video, but the smaller the file size, the faster it will load.

Now that you have the bulk of your tweet, it’s a good idea to @ mention the original creator or publisher of the content you’re about to share. Not only is this polite, but it also means that person is likely to see you’ve shared their work, and may retweet or follow you in response.

If you don’t already know the @username of the person who created the content, all you typically need to do is type the company or individual’s name into Twitter’s search bar.Copy and paste the @username into the tweet – either before or after the URL usually works best.

It takes more time to find the relevant Twitter handles to mention in your posts, but it’s worth the effort; Twitter’s research states that brands who double their use of @ mentions gain 17% more followers.

There has been some debate in the social media marketing community of late about how effective hashtags actually are.

If you’re unsure about what hashtags even are, don’t worry – they are basically just a way of labelling things. They help people find tweets that interest them, whether that’s a topic (e.g. #business), an event (e.g. #NewYear) or discussion (e.g. #BrandChat). Once upon a time, using hashtags was a great way to join in on a conversation among like-minded people, or to get your tweet noticed by the right communities.

Evidence about how useful hashtags are is contradictory: on one hand, Twitter says posts with hashtags get twice as much engagement. On the other, recent research by Venngage suggested that of the 137,052 tweets they looked at, hashtags made no difference.

This is another factor that will depend on the industry you’re in, your audience, and the results you get – you may find hashtags help, you may find they don’t. If you do decide to try them out, tools like Hastagify.me and RiteTag are like search engines for all things Twitter. They will show you hashtags related to your field, along with how popular they are.

One thing is definitely inadvisable, though: using too many hashtags. Using more than two hashtags can look spammy, and put people off.

Before you click ‘tweet’, re-read your creation in its entirety. Are you still within the character limit? If not, here are a few things you can do to shorten the post:

– Remove unneeded hashtags. If the post already contains the word ‘dog’, for example, you don’t need to add an additional #dog hashtag at the end of the post – simply add a hash next to the existing word.

– Find abbreviated hashtags, like #mrktng and #smallbiz, to replace longer ones as long as they’re popular.

The one thing you should not do when shortening a tweet is compromise on your message. Ultimately, what your tweet says it much more important than anything else – it’s this people will respond to. Remove the odd unnecessary word, but otherwise, try to keep your carefully crafted headline intact.

Though not part of the tweet-writing process, it’s worth mentioning that how you publish your tweet can also have an impact on its success.

One option is to simply hit ‘tweet’ and publish your thoughts, links and ideas as they come to you. That’s how Twitter was originally conceived – as a platform for live ‘micro-blogging’.

But now, with so many people managing multiple social media accounts (often while juggling other projects), reinforcements have arrived in the form of social media schedulers. These are tools that let you plan tweets ahead of time, and publish them according to a set schedule. Buffer, Hootsuite and Tweetdeck are among the most popular.A major benefit of these services is that they allow you to get organised; you can make sure you have everything queued up in social media without needing to constantly update your Twitter feed. They often have extra tools, too, like Buffer’s Optimal Scheduling Tool. This will automatically calculate the best times of day for you to post, and set up that schedule at the click of a button. Here’s a quick introduction to using it:

However, as attractive as scheduling all your tweets can be, live tweeting still plays an important role. If you want to create an instant connection, start a conversation, or comment on an event as it unfolds, live tweeting is the way to go. As Jay Perkins of Sprout Media puts it:

‘There is nothing wrong […] with keeping a steady flow of relevant, timely and interesting content across your social media profiles, but you must also engage with people to have an effective presence.’

So, as with most things, you need a balance. You can’t always be on Twitter, which is where tools like Buffer and Quuu come in handy – but if you can, it could reap rewards to post live too.

What works for you on Twitter? Is there anything you struggle with? Let me know in the comments!

If you are a business owner or marketing director looking to increase your social media presence then this article on how to be a Social Curator will give you a great grounding in how to flood your social media channels with tonnes of quality...

Social Media Strategy: Plans For Your Business in 2020

Social media has evolved greatly over the last few years. Many businesses can utilise the benefits of social media strategies to optimise their position in the digital market. With the market seeing huge changes in 2019, it’s important to stay up-to...

Social media strategies you can try in 2020

Here’s what we’ll be looking at in more detail today to hopefully help you with your social media strategy: Setting realistic goalsNail down your target audienceIdentify the best social media networks for your...

How to find the right micro-influencers for your small business

How to completely declutter your social media

How to come up with fresh ideas for social media